The Problem with Our Feathered Friends

Geese, swans, and ducks may seem like a beautiful and natural part of a lakeside environment.  You may enjoy them so much that you even spend time feeding them or otherwise encouraging them to spend time on your property or in local parks – but overly large waterfowl populations can actually cause several problems for humans, water quality, and other wildlife.

While Canada Geese are a native species, overpopulation caused by habitat changes and feeding by humans has begun to cause negative impacts.  Lush green turf grass planted right up to the edges of our lakes, ponds, and streams has created the perfect habitat for their populations to explode, and for this reason, they are present in much higher numbers and for longer periods of time than they have been historically.  These same conditions encourage larger than average populations of ducks and Mute Swans, often in the same location.  In addition, the Mute Swan is not even native to the United States– it was introduced from Europe and disrupts natural Indiana ecosystems.

The overpopulation of waterfowl can seriously damage populations of native plants and wildlife in and around lakes and streams.  For example, Mute Swans require eight pounds of aquatic plants as food each day!  As Canada Geese and Mute Swans look for and take plants for food and nest material, they are robbing other wildlife of important habitat.  Many of the aquatic plants they eat – such as eel grass – are scooped from the lakebed by the waterfowl and form giant mats of floating nuisance weeds that are blown to shore.  In addition, Mute Swans have been reported to attack, injure, or kill other desirable wetland birds.  While a property owner may be delighted with the beauty of a pair of Mute Swans, these birds are actually an invasive species that native plants and animals are not adapted to, and they may end up over time actually reducing the native wildlife and vegetation that was so desired.

Their Poo is 'Fowl' Too! 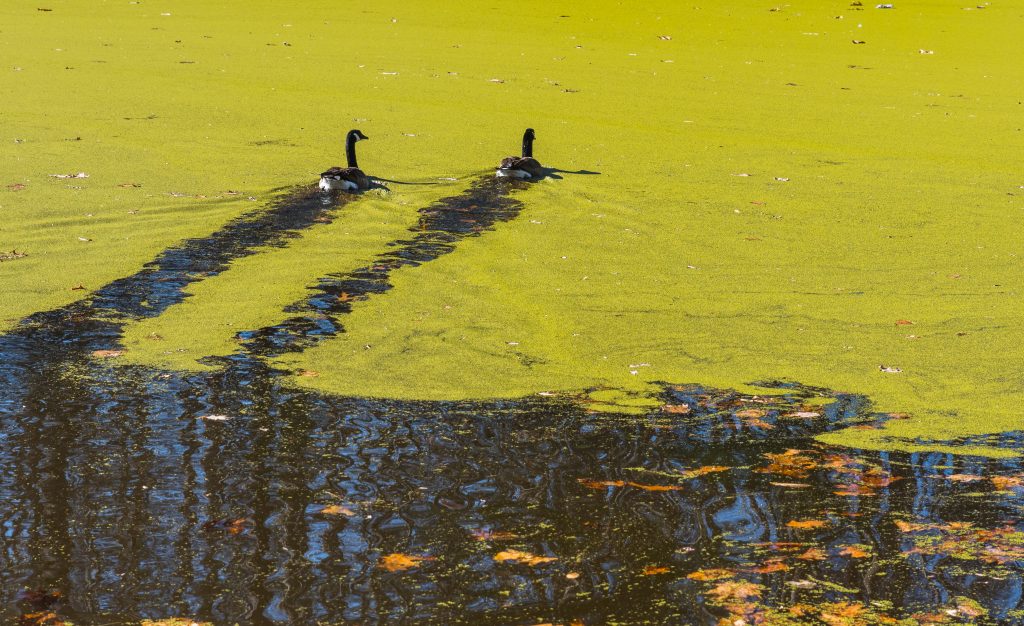 These large wildfowl populations leave a LOT of droppings behind.  For example, a single Canada Goose eats 3 – 4 pounds of grass and can create as much as 2 – 3 pounds of waste per day!  Between their heavy grazing of grass (and occasionally even ornamental plants) and significant amounts of waste, a large flock of geese can make a backyard or park a very unpleasant place for people to spend time.  These droppings are not only unsightly, they can also make people sick, add nutrients and bacteria like E. coli to our lakes and streams, and in some cases even present a fall hazard to humans because of the slippery surface excessive droppings can leave.  Nutrient loading from waterfowl droppings can contribute to water quality problems such as summer algal blooms, and bacteria from these droppings can accumulate to levels that make the water unsafe to come in contact with.  Geese and swans can also be very aggressive towards humans, as well as other native wildlife, especially if they have built a nest nearby.

While the impacts on native wildlife and vegetation are clear, many people do not realize that geese, swans, ducks, and even seagulls can pose a threat to human health when present in large numbers.  In some cases, they can even present a threat to their own population’s health – large congregations of waterfowl can facilitate the spread of diseases among these birds that would likely not be transmitted in wild settings.

Research has shown that goose poo in particular can contain a wide variety of pathogens capable of infecting humans.  Parasites that cause gastrointestinal problems (particularly Cryptosporidium and Giardia), have been found in many species of waterfowl feces.  Additionally, feces from geese, ducks and swans commonly act as hosts for the parasite which causes swimmer’s itch.

Harmful bacteria is another significant concern associated with high levels of waterfowl droppings.  The warm spring and summer months especially facilitate significant growth of E. coli in aquatic systems (especially swimming beaches), right at the time when people most desire to enjoy these locations. E. coli is known to cause stomach cramps and diarrhea. And the culprits aren’t always the geese – other common lakeside wildlife can cause similar problems.  A recent study completed by Grace College found that on some of the public swimming beaches in Warsaw, IN, gulls were the primary source of E. coli bacteria.  Although less common, other forms of bacteria that may be harmful to humans can also be associated with waterfowl droppings in some situations.